Lucy brought home a project last week to work on

It was titled Spring is...

Lucy worked so hard on it

When she finished, she proudly showed us her completed book

The bee picture made me laugh aloud...I think it was the eyes 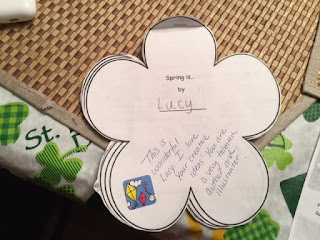 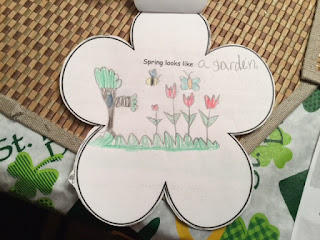 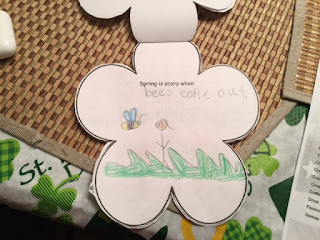 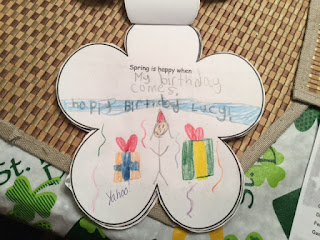 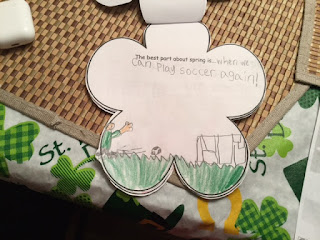 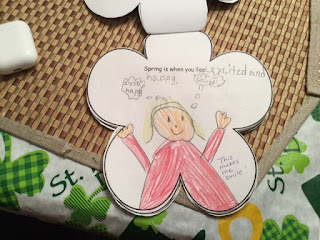 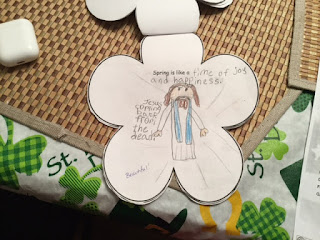 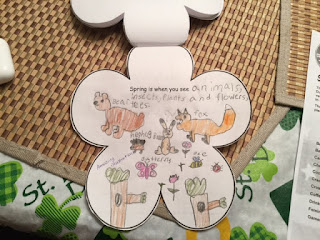 I was born and raised in Maine
I left when I was 17 for college in upstate New York
Then I moved to the mid-west
Then I moved to Massachusetts
I've not lived in Maine since I was 17
But I still call it home
And I still think it is the best place I've ever lived
And not just because when I lived there my Mum did my laundry
Maine started out as this little territory where the Norwegians used to come to hang out with the Indians and trade stuff
Then the British and the French showed up
And the fighting started
The British fought the French
Then the British fought the Americans
Then the Americans won and "rescued" Maine from becoming Canada
And Maine became part of Massachusetts
We were physically separate from Massachusetts but they still bossed us around
We've had a love hate relationship with Massachusetts ever since
Maine tried more than once to secede from Massachusetts
It did not happen until March 15, 1820
It was on this date Maine became the 23rd State of the Union as part of the Missouri Compromise
And it on on this date in 2017, we say Happy 197th Birthday to the Great State of Maine
Today, I live in Massachusetts
But my heart, my love, my loyalty is with Maine
I love Maine
And not just because we have multiple official and unofficial state slogans:
Dirigo
It Must be Maine
Vacationland
There is More to Maine
The Way Life Should Be
As Maine goes, so goes the Nation
Worth a Visit, Worth a Lifetime
Where America's Day Begins
Maine: We're Open for Business
I love Maine for the pine trees, blueberries, and moose
For the salty sea, the fresh air, the endless night sky and rocky coast line
I love Maine for whoopie pies, Amato's and Humpty Dumpty chips
I love Maine for the Green Bridge, the big globe and the Indian Statue
I love that everyone in Maine has a blue tarp in their trunk just in case
I miss the no nonsense practical way people think and talk
I miss the things we say in Maine:
In Maine, things aren't cute, things are cunnin'
We don't have basements, we have cellahs
In Maine, we don't hit people, we deck 'em
We don't throw things, we either chucked it, hucked it or winged it
In Maine, it's not likely, it 'taint likely
We don't get worked over in a business deal, we get rooked
In Maine, its not that we don't care, we don't give two shits
And we don't kid or joke around, we shit you not
On weekends, we go upta camp and inta town
And we don't run, we book it
In Maine, we don't remember the time, we 'member that time
And we don't steal things, but we kife it
Also, dinner is only on Sundays, every other day we have suppa
And things aren't close by but instead, are up the road apiece
In Maine, people are not eccentric, they're a rig
And we don't ask what you are doing, though we may ask Chuppta?
When you are a kid growing up there, you don't appreciate Maine as much as you do when you are an adult who has moved away
As an adult, my appreciation, pride and fondness for Maine swells with each year I'm gone and everything I realize Maine has given us:
Acadia and Baxter State Park
The Portland Head Light and Fort Knox
Monhegan Island and Eastport
Sand Beach and Sandy Point
Green Lake and Bass park
Funtown and Old Orchard Beach
Dysarts and Hussey's
The Penobscot
The County
Blueberries and fiddleheads
B&M Baked Beans and Brown Bread (in a can)
Stonewall Kitchen and The doughnut hole
Toothpicks and Earmuffs
Reny's and LL Bean
Togus - the hospital and the cat
Moxie and Whoopie Pies
Brian Butterfield and Bob Stanley
Dorothea Dix and Milton Bradley
McDreamy, Linda Lavin and Judd Nelson
Bill Cohen, Mrs Sullivan and The Busch Family
The Kearns Family
The Demaso Family
Winslow Homer and the Wyeths
Sal, Jane and Burt Dow
Henry Wadsworth Longfellow and EB White
Margaret Chase Smith, Susan Collins and Olympia Snowe
Paul Bunyan and Joshua Chamberlain
Tourney Week (February Vacation)
The Bangor State Fair
The Blue Hill Fair
3,500 miles of coastline
Your one syllable name
The Maine Stein Song
The 16 Counties of our State
And not just the actual counties but the song we all had to learn in grade school
To this day, I still hum that song for no reason
I taught that song to my husband just because
And I don't care where you are, if you start singing that song, any Mainer within a earshot will start singing along with you
True story
It's how I made friends with this guy I knew in 2004
I was at Wellington Station, started singing that song (who knows why) and this guy started singing with me
Turns out, he had just moved to Medford (he lived one street over form me) and was from Rumford
We sang that song, hung out a bit that summer and then he moved back to Maine because he hated Massachusetts (it was too loud, too fast and smelled funny)
He's right
I love Maine
I love everything about it - except Cape Elizabeth, they are so snotty
I'll live there again someday....I hope anyway....on a lake....or Cadillac Mountain if they'll let me
But until then Maine, Happy Birthday from afar
I miss you, I love you, and I adore you
You lead Maine and I follow
Happy 197th Birthday Maine!
Posted by Maria The Mum at Wednesday, March 15, 2017 No comments:

Today is a big day for us Jesus Freaks as my brother likes to call me
It is Ash Wednesday which marks the beginning of the Season of Lent
It is a season of penance, reflection, and fasting which prepares us for Christ's Resurrection on Easter Sunday
And it is through the resurrection of Christ which we will attain redemption
The ashes are reminder of our mortality and devotion as a follower of Christ
The ashes are a symbol of repentance, of mortality, of the day we will stand before God and be judged
The ashes mark the start of a season of examination and abstinence known as Lent
During Lent, we'll fast, pay penance, abstain from meat on Friday, and go through periods of self-examination in preparation for Easter
And, we'll give something up as a form of penance
For some, it will be a luxury they give up
For others a vice
For many, it will be some form of food or drink
Some will decide not to give something up but to do more of something
Others will use Lent as a declaration to make a dramatic lifestyle change
For many, it will be at time in which we try to embrace and embody what it means to be a "good" Catholic (because you know, we only have to do that 46 days out of the year during Lent)
We'll attend Mass as a family this evening and receive our ashes from last year's palms
And as we begin the Lenten season, as a family, we'll make our declarations to one another of what we are giving up/embracing/going to do better during Lent
Sean has mentioned he'll probably give up beer or the Groove crackers he likes to snack on
I have no doubt Sean can give up crackers and beer
When Sean decides to do or not do something, he just does it or does not do it
He has more self control and will power when it comes to shit like that than anyone I know
It is really, really annoying
Lucy thinks she can give up TV
Lucy giving up TV is a different story
Look, I love her, and I want to be supportive....but Lucy giving up TV is just not realistic
She loves her screen time way too much
Plus, I know my kid
She'll wiggle out of this on one of two technicalities:
1. She'll still try to finagle screen time on the iPad via Hulu, YouTube and Netfilx
Because when she says she's giving up TV, she is being literal and saying she will not watch anything on the big TV
2. If Sean or I happen to be watching something, say Football (soccer), March Madness, baseball or Chopped, and she walks into the room, she'll argue it doesn't count because she was not the one who either a) turned on the TV or b) picked what was being watched
I'd like to think she has a future as a lawyer or an advocate of some kind but a grifter is probably a more viable option
I have no idea what I'll give up or do more (or less) of during Lent
Sure, I could give up pizza or candy or coffee or be less self deprecating but I'm pretty sure that would just result in low blood sugar levels, a headache and I would not be nearly as funny as I am now
So then I thought I know, I'll give up swearing
Especially after last night when I accidentally taught Lucy two new swear words
So this morning at breakfast, I said hey Lucy, have you decided what you are giving up for Lent?
No Mumma, have you?
I have! I enthuse all proud of myself, I'm going to give up swearing!
Lucy looked at me blankly
Swearing?
Yes! No more F Bombs, no more bad words...
You're going to give up swearing?
Yep! I replied all smug and proud of myself with a can do attitude, I'm giving up swearing!
Lucy set her spoon down, looked me square in the eye and lost her proverbial shit
That kid laughed for seven minutes straight
Twice, when she appeared to have regained composure, but when I repeated I would not swear for the next 46 days, she laughed even harder
I called Sean on my way to work after I dropped Lucy off
Honey, listen to this, I say, when I told Lucy I was giving swearing up for Lent she....
I never finished
Sean started laughing as soon as my words were out of my mouth
When I arrived at work, my co-worker and I were chatting and he asked if I give up something for Lent
I do I said, and this year I'm giving up swearing!
He laughed
Almost as hard as Lucy did
Definitely as hard as Sean did
So I'll be giving up ice cream
Posted by Maria The Mum at Wednesday, March 01, 2017 No comments: