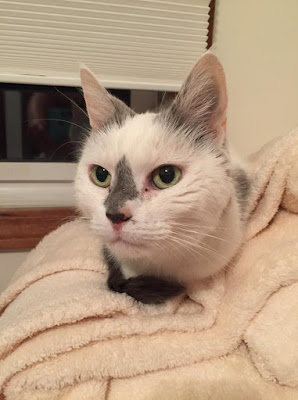 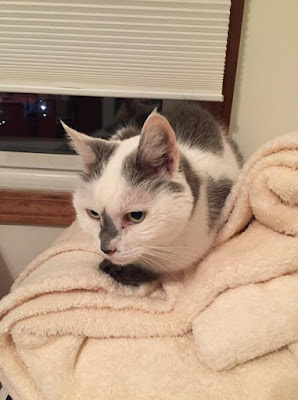 Last night, she sparred for 6 minutes, did at least 30 crunches, 30 push ups, 100 punches and planked for so long her body started to tremble and though she’ll deny it, she was brought to tears with less than a minute to go
But she persevered and now she is a brown belt.....
One belt away from her black belt
We will sleep with one eye open from now on
And could not be more proud of The Goose 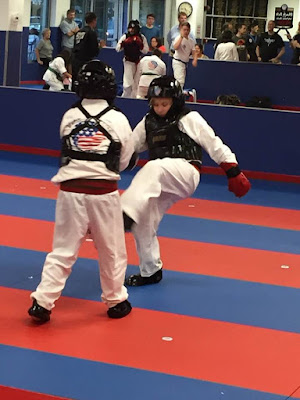 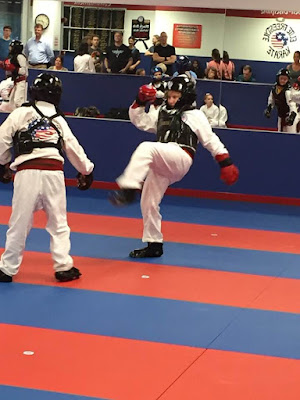 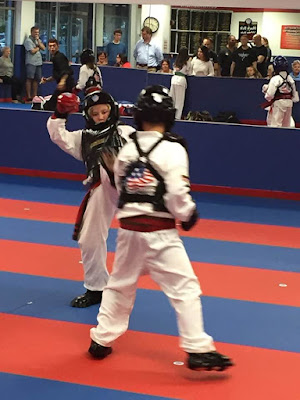 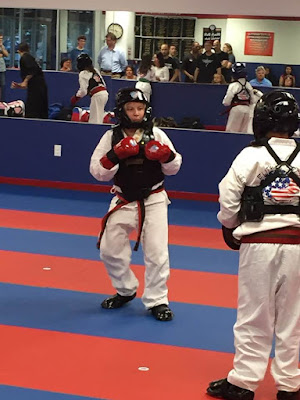 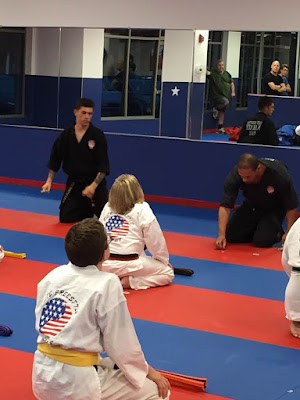 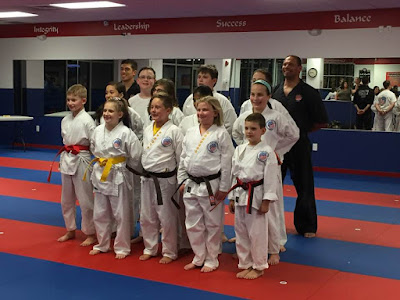 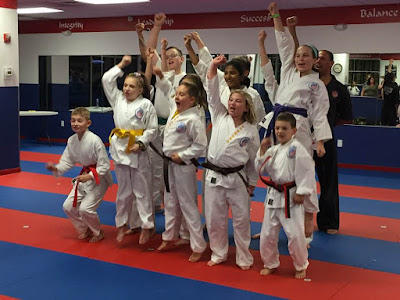 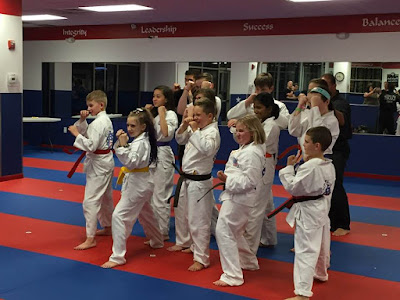 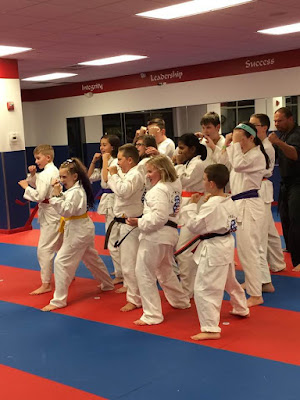 
I'm the only person in the office today
I mean LITERALLY the only person
My one call was cancelled
It is so quiet, I am not only caught up, I am working on next week's calendar items
I also engaged a telemarketer in conversation for 20 minutes, had coffee with the Fed Ex Freight guy, used the motion board I got with my stand up desk for 25 minutes, shared my grandmother's blueberry muffin recipe with the mail girl and made a playlist
It is not even 1pm.....
Posted by Maria The Mum at Wednesday, September 26, 2018 No comments:

Happy Birthday to the Other Queen


For some, today is a day to celebrate National Raspberry Cream Pie Day or National Girlfriends' Day
Others will partake in events for National Scout Scarf Day or Worldwide Web Day
It is also Respect for Parents Day and International Childfree Day which confuses my head a bit but who am I to judge
Some people will use today to kick off Inventor's Month, Fishing Month, Peach Month and Happiness Happens Month
There will also be, I am guessing, birthday remembrances and parties for Claudius Francis Scott Key, Herman Melville, Mother Jones, Henrietta Lacks, Dom DeLuise, Jerry Garcia, Coolio, and Jason Momoa
But for me, I will spend August 1st celebrating one of my all time favorite people
She's smart and sassy, no bigger than a minute and single handily brought back Talbots
She loves penguins, feeds the birds, chipmunks, deer and chickens which frequent her backyard and talks to all of them in a sing songy voice that makes you wonder if she is not in fact Snow White
She's up on politics, down with Jesus, and adores the Blessed Mother
She still watches the Golden Girls and Designing Women as if they never went out of style or off the air
She's retired but has never been more busy and has a schedule which rivals the Queen's
She can relate to the youngest person in the room, the oldest person at the table and everyone in between
She's soft spoken but packs a powerful punch with her words and her laugh will bring tears of joy to your eye
She can put you in your place with a single arch of her eyebrow and build you up with a nod of her head and five encouraging words
She says things like:
beggars can't be choosers
if wishes were horses beggars would ride
praise the Lord and pass the ammunition
dogs barking, can't fly without umbrella
She sends text messages filled with emojis and GIPHYes
And she still sends cards for every occasion and thank you notes for gifts received
She is Grammy and Grampy's eldest daughter and Aunt Nell and Uncle Ed's favorite niece
She's a younger sister, an older sister and an aunt to so many nieces and nephews
She's a wife - 51 years this past February
She's a mother (1 boy, 6 girls, all natural child births ladies..... ALL NATURAL.....all 7 times...)
She's a Noni to 4 adoring grandsons and 2 doted on granddaughters
She's a friend to many, a companion to some, a lifeline for others and she diligently prays for every single one of us
She's been strong in the face of adversity and vulnerable with a quiet strength and faith that sees her through to the other side
She's taken a lot of shit from people over the years but has never complained, she simply shrugs, and knows that this too shall pass
She is more than I could ever hope to be
Loretta Kearns, you are, and continue to be, the only person I will go out of my way to wish Happy Birthday to on Facebook.....
And not just because you are my favorite Mum but because you continue to be one of my favorite people in the whole wide world
May your day be filled with well wishes, love, frosting (why bother with the cake), and whatever your heart desires
Happy Birthday Mum!
Hang onto your wishes and dreams
Eat your veggies, say your prayers and keep being you
Love the bag, love the shoes, love everything, love you!
Posted by Maria The Mum at Wednesday, September 26, 2018 No comments:

At the Car Wash


Sent Lucy and Sean outside to wash the cars
The sidewalk and the side of the house have never looked so spic and span clean
Also, Sean may be giggling louder than Lucy
He definitely screams louder than Lucy
And Lucy's aim with the hose has improved dramatically since last year
Posted by Maria The Mum at Wednesday, September 26, 2018 No comments:


So proud of this little knucklehead......
She packs a mean punch and has one helluva kick
She can do more push-ups than most people I know and does 40 jumping jacks without breaking a sweat
She's sweet, stubborn, sassy and selfless
And now she's two belts away from being a legit black belt
Well done Goose, well done! 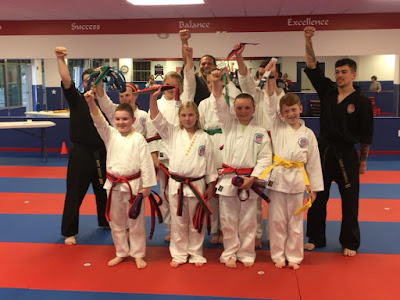 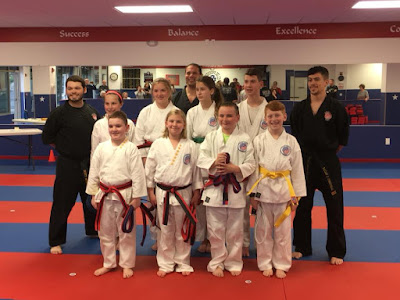 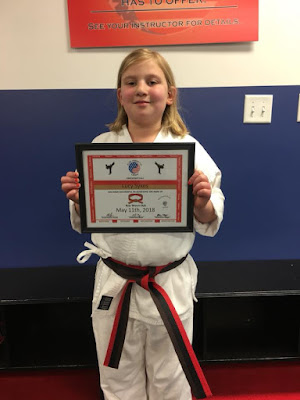 The girl has got moves


Was lazily flipping through old pictures on my phone the other night ... around 10pm
This gem of a video popped up
I watched it
Laughed so hard and loud, I woke Lucy up
Her noodle legs slay me
She had just turned 7
Now she’s 9
And her dance moves are still epic

Lucy turns 9 Monday
This is the first year we've not had a birthday party
Her choice, not ours
When she turned 2, Lucy loved Nemo
So we turned the house into the Great Barrier Reef complete with jelly fish, swimming fish and waves
At 3, we transformed the living room into a zoo with wild (stuffed) animals lurking around each corner
For her 4th party, we went on a dinosaur dig
There were excavation sites, a dinosaur egg hunt and homemade fossils
By 5, Luce was a full fledge cat lady and decided a Kitty Party would be the perfect way to comemerate her milestone birthday
We had a cat adoption center with kitties (stuffed) and adoption certificates, kitty crafts and a mouse hunt
By 6, Lucy had developed a love of Pokémon and that was the chosen theme
So with red and black sharpies, we turned 100 ping pong balls into poke balls
The kids designed and created their own Pokémons and we all became trainers
When she turned 6, Sean introduced her to Star Wars
She was hooked
So birthday 7 was Star Wars themed
We made light sabers and learned how fight like a Jedi
We battled storm troopers, and Darth Vader and pinned the saber on Yoda
At 8, Harry Potter was the favorite
We made wands and practiced spells from our spell books
We hatched dragon eggs, attended potions class and had a Quidditch Match
Then, we searched the yard for the Golden Snitch
8 was a kick ass party
I could not wait for her 9th birthday party
But this year, on the cusp of 9, Lucy announced she did not want a party
I was gutted.......I love planning and hosting her parties....
When I asked her why, she just shrugged and said just because
So I did not push
Instead, we asked what she wanted to do
Without hesitation, she requested a day of fun with her oldest and dearest pal Jake and then a sleepover movie night with pizza and white cake because Jake does not like chocolate
No problem we said, we'll make it happen
We can also have a party I offered....
No thank you Mumma...
A few nights ago, she finally told me why she did not want a party
It made my heart hurt a little but also made me marvel at how far she has come
She is more self aware and better able to self regulate
She's stronger and more mature
And she is able to look at things more matter of factly and from more than one point of view
She still struggles and sometimes it all gets the best of her
But she's being the best Lucy she can be
And somehow, she's hung onto her naive innocence
*sigh*
She's turning 9
No party
No ping pong balls being turned into snitches or poke balls
No light sabers, wands, spell books or dinosaur digs
No fanfare
But she's promised me we'll still have cake....
Posted by Maria The Mum at Wednesday, September 26, 2018 No comments:

Back in April, when Lucy turned 9, one of my favorite authors turned 102
I wrote this in honor of her birthday


When I was a kid, I had a list of authors I loved and adored:
Judy Blume, Lois Lowry, Laura Ingalls Wilder, EB White, Paula Danziger, Michael Bond and Carolyn Keene to name a few
And then there was Ramona Quimby written lovingly and funnily by Beverly Cleary
Those were among my favorite books
I connected with Beezus - the older, put out by her kid sister, sister
But I secretly wanted to be Ramona
When I was a kid, I wrote Mrs Cleary a fan letter
I can't remember if she wrote back, you'd have to ask my Mum
But I knew I adored her
Because of her and Judy Blume, I really wanted to be a writer
In my head, these two women, the other authors, along with their characters, were my friends
When I was in my teens and and as a young adult, I would pick up Mrs Cleary's books and read them simply because they were an easy read and made me smile
(I'd also re-read Judy Blume's books to keep some of my angst in check)
Now I read them as a Mum with Lucy and I not only smile but am reminded of my own youth
I am reminded of why I love reading and writing so much
I am reminded how lucky we are to have the written word of so many great talents.....
Of how lucky we are to have such easy access to these wonderfully written works
And how lucky I and my daughter are to have the education to read these words
Today, Beverly Cleary is a 102 years old
She is a Living Legend.... how lucky we are to have her wit and wisdom on paper preserved for years to come!
Thank you Mrs Clearly for Ramona, Beezus, Henry, Ralph the Mouse and Socks
Happiest of days to you - and thank you for being my friend
Posted by Maria The Mum at Wednesday, September 26, 2018 No comments:

What I am Thankful for

Also back in March, I was cleaning out some papers and came across this gem Lucy wrote back in November 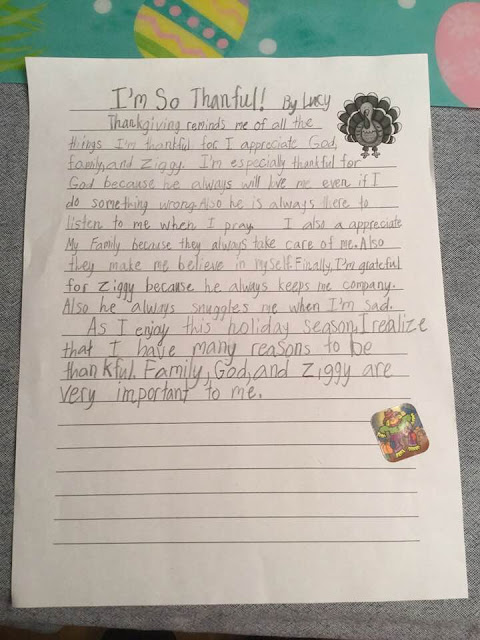 College is not for everyone