We love Halloween
Not really for the ghouls and gore
More for the candy and the carved pumpkins
Sean spends hours carving intricate designs
I'm in charge of scooping out the pumpkin guts
I am also in charge of carving the obligatory and traditional Jack-o-Lantern
Sean is then in charge of fixing at least one eye and the mouth on said pumpkin
Sean and Lucy will spend hours talking about and deciding what the design on the pumpkins should be
They search for the perfect picture whilst I scoop out pumpkin guts readying their canvas
This year though, Lucy had other plans
Recently, Lucy introduced us to Kung Fo (Fu) Kitty
Maybe you saw his picture I shared a couple weeks ago
He's a black cat
He wears a red face mask
His paws are always raised and at the ready as is one of his back legs
He comes from the mountains of Japan which he has spent his whole life protecting
Kung Fo Kitty can kick your ass
But not for no reason, he's actually here to protect us from bullies and evil
This afternoon, Lucy informed her Dad she'd like Kung Fo Kitty on her pumpkin
Sketch him out for me said Sean as he handed her a pencil and piece of paper
Lucy drew Kung Fo Kitty's head complete with mask 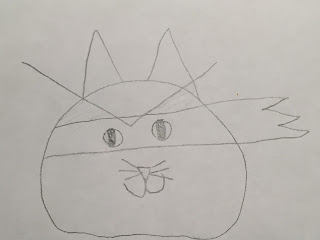 Then Sean took the pencil and sketched out Kung Fo Kitty as a template, on paper first 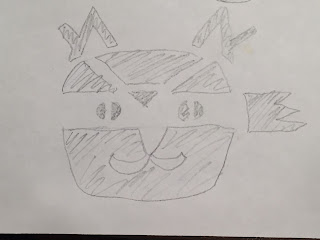 Then, he turned that into a "drawing" on his computer
Which he then printed as a template 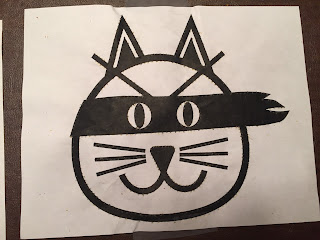 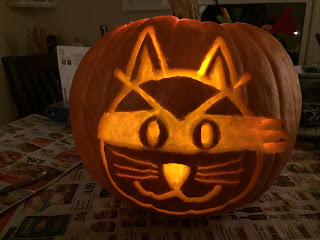