My mother's family, specifically her parents, were born and raised in Revere, MA
My grandparents, Rose and Louie, were the only two who ever moved away

When I was a kid, we used to travel down to Revere to visit with my Great Aunts and Uncles (who were of course my mother's Aunts and Uncles, my grandparents' brothers and sisters)

We had two favorite houses we went to: Great Uncle Mike and Great Aunt Sue on Bates Street and Uncle Ed and Aunt Nell on Hawes Street

I remember Uncle Mike always being in the garden with his shirt open, pants rolled up, socks showing and a jelly glass with libations next to his lawn chair in the garage
He was forever damning someone somewhere in some form of government

I remember Aunt Sue always in the kitchen or in her chair on the porch with her arms open so you could hop up for a hug and a cuddle
She gave the best cuddles and would speak so quietly and softly you would have to lean in to hear her
And when you did lean in, she would always plant a kiss on your face and then giggle with so much love and affection it made you giggle too

Uncle Ed is my grandfather's youngest brother, the youngest in a family of 11 kids
And today, he is the only surviving member of that generation

I remember Uncle Ed also always in the yard puttering - picking up the yard, gardening, or watching the birds pointing out each and everyone of them to us
If he was not in the yard, he was in the basement making something
He could, and still can, take a piece of wood, I don't care if its a twig or a board, and turn it into something of such remarkable craftsmanship you can't believe your eyes

But wherever he was, one of us was always allowed to tag along

Aunt Nell
Aunt Nell was everone's favorite
She always has been, she always will be

Aunt Nell was either in the kitchen making tea, baking, writing letters (she was the best letter writer ever) or flipping through a newspaper or magazine clipping out art work, recipes, or articles because it caught her eye and she knew just who she would send it to

When you would get a letter from Aunt Nell, which was always at least 5 sheets, front and back, and you pulled it from the envelope, a little cartoon would flutter down from the pages or a recipe was attached or an article with certain passages she thought you would like would be highlighted for you

Aunt Nell had this amazing ability to make us all feel so special.

Aunt Nell remembered everything and everyone

I could tell her about a recipe I was trying to find and four days or four months later, in my mailbox, there would be a letter telling me about how, after I left, she got to thinking about it and remembered seeing such a recipe in one of her magazines

And she would find that magazine and then go back to her recipe box and pull out two more recipes because they were similar and send them all along as well
And they would all be in her writing, on her recipe cards...I cherish those cards

Her letter would go on to tell me who liked the cookies she baked from the recipe and who did not
She would tell me what I could substitute and what I could not
She would even tell me which brand of ingredients she found to work best
And if there was a trick to it, Aunt Nell would find the trick and make sure you knew it as well

Aunt Nell's letter would then include a story.....
A story about how she would store the cookies in tins on the staircase going to the basement and when Uncle Ed would go to the basement to work, she could hear him pause, pop open a tin, rattle around for a few cookies, pop the cover back on the tin and continue on down the stairs....
And come the day she needed those cookies, say Christmas, there would never be more than 1/2 a tin left!

Aunt Nell had a story and a memory for everything

Aunt Nell died three years ago now
March 21, 2010
She would have been 90 that August
And she was my favorite

When we were kids and would come down to Revere to visit, we would at some point get to Aunt Nell and Uncle Ed's
And Aunt Nell would always make tea and lay out cookies for us
And Aunt Nell always let us drink our tea from proper teacups

I know this to be true because last September, we were at Cousin De's for a cookout
Cousin Kay, Aunt Nell's daughter, arrived and quietly handed me two pieces of paper
They were pictures I had drawn in 1976 and 1977 while visiting Aunt Nell
Both were dated in Aunt Nell's writing and labeled as being drawn by Maria Rose, age 4
My reaction was to cry
Which I of course did
Then I marveled, and still do, that Aunt Nell would hang onto something like this

Monday, Lucy was busy at her table drawing while I was getting dinner ready
She came dashing into the kitchen with a big grin on her face and something behind her back

When Lucy has a big grin in her face and is hiding something behind her back, it can go one of two ways

Mumma! I made you something! Close your eyes!

So I close my eyes, hear the rustling of paper and Lucy shouts

So I open my eyes and this is what I see (Lucy wrote her own name, I wrote Ziggy and Herbie's names): 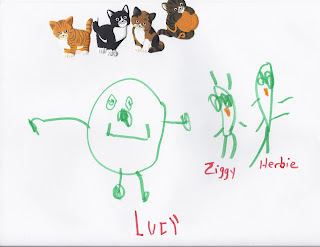 I love it Lucy!
You do Mumma??
Honey, it is perfect and I love it! Will you write your name for me?

As Lucy clambered up to the table to write her name, I couldn't help looking at the picture thinking it reminded me of something......it was familiar for some crazy reason
I felt like I had seen it before.......
But where....?

Mumma you write Ziggy and Herbie's names OK?
OK Luce
Mumma think Daddy will like it?
He'll love it Lucy, we'll show him as soon as he gets home

It was when Sean got home that it dawned on me....
I remebered where I had seen something so similar to this before...... 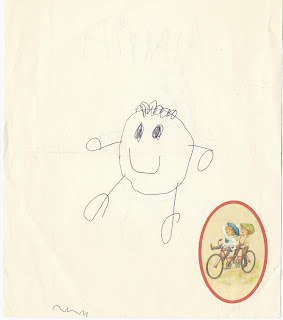