I'm Holding out for a Hero

You guessed it, a Mama Kat writing prompt: #5 Write about a childhood hero

I'm not convinced I had a hero as a child.....I'm not sure I knew what a hero was.
But there was a long list of people I emulated (not that I knew what emulated was as a kid but, I knew I wanted to be just like these people)

Nancy Drew: she was smart, pretty, drove a convertible, she solved crime and mysteries....and her friends had cool names (Bess and George, does not get cooler than that) and, her house had a library in it with built in book shelves and all

Harriet the Spy: she wore glasses (like me), she kept a journal, she had a nanny, she lived in the city and, she was a spy

Anastasia Krupnick: she had a cool name, kept a journal, lived in a tower room and wore glasses...a tower room...how cool would that be

A nun: I loved Church and Sunday School. I may have been the only kid who looked forward to Sunday. And at one point, I remember making the decision to be a nun...it may or may not have been shortly after I watched the movie Song of Bernadette. I think I wanted to talk to God, I wanted to understand what he had in store for me and I also wanted to know if he could stop the world...not from spinning...I wanted him to stop time rather than the world...I still do....anyway, I figured if I were a Nun, I'd have more clout with him.....but then, I found out if I were a nun, I could not be.........

John Travolta's Girlfriend: Nun's cannot have boyfriends....I did not know this at the time but when I found out that nun's could not have boyfriends (Sister Catherine boxed my ears for asking), I decided that dream would have to wait as John needed me....I don't even know if he had a girlfriend at the time. All I know is I saw Grease and fell in love. And, I had this shirt: 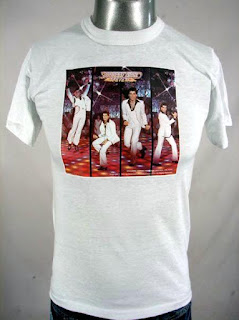 Who would not want to be this man's girlfriend?!?!?! I was in the third grade and I was convinced John Travolta would wait for me...he did not but, I'm pretty sure he bought his summer home in Maine because he knew I lived there and maybe, just maybe he would bump in to me

Mrs Hooper: she was my first grade teacher. And she wore turtlenecks, pretty necklaces, long skirts, had short hair and glasses (like me) and she was the best teacher. And she loved reading......and, she let me read ahead and, she told me it was okay I could not draw as well as the other kids because I read better than they did.... I wanted to be a teacher because of her...part of me still does

Mrs Capen: Peggy, Peggy, Peggy. When I was in Jr High, I was a student volunteer at the public library which was attached to the school. Mrs Capen was the new librarian and I was the first of her volunteers...I did it all 3 years I was there. I'm pretty sure she was a divorcee. Anyway, I was a student volunteer and just adored her. The other kids thought she was mean...she wasn't...she just did not put up with their antics because frankly, she did not care who your parents were, she was not going to let you do what you thought you should be able to do.
She knew ALL about books and she let me read whatever I wanted...she would encourage it. And I could talk to her about any book I had read....I don't think I ever read a book that she had not read...amazing. And, she would let me read the new books the library got even before they were put on the shelves. Plus, she talked to me, not at me but to me and with me....and she talked to me like I was a grown up not a kid...and, she knew all the good gossip in town about EVERYONE (and she did not even live in our town). She was awesome...I totally wanted to be her when I grew up. I think she may still be there at the old public library.....I wanted to be a librarian because of her....part of me still does

Margaret Chase Smith: it was hard to be a young girl in Maine and not want to grow up to be Margaret Chase Smith. She was the first woman to serve in both houses of Congress (first as a Representative then a Senator) and she was the first woman to represent Maine in either capacity. She was a Republican, and until 2011, she was the longest serving female in the Senate. She had great hair, wore pearls and even had her face on a stamp. She was witty and wry and stood up to Joseph McCarthy (if you don't know her Declaration of Conscience, I strongly encourage you to read it)
She challenged John F Kennedy as a peer and as President and among the other classy things she did, she placed a rose upon JFK's old Senate desk the day after his assassination.
She was Margaret Chase Smith.....and is still one of the people I look up to....
One time, I thought I wanted to be in public office because of her...but I had way too much fun my last year in college and in my 20's to ever run for public office

Maria von Trapp his unruly kids (though I don't think he was as handsome or they were as unruly as the movie made them out to be)......and because she escaped the Nazis and opened a ski lodge in Vermont! Who outruns the Nazis, moves to Vermont and opens a ski lodge?!? How can you not admire that? Plus, she could sing, play guitar and was a nun...and, we shared the same first name so it would have been an easy transition to being her

Daisy Buchanan: I read the Great Gatsby when I was probably too young to be reading the Great Gatsby. When I read it years later, I understood it a whole lot better....nonetheless, when I read it in the 5th grade, it did not stop me from wanting to be Daisy. She was always the belle of the ball. She was flirtatious and fun loving. She was sassy and frivolous. She was mysterious, full of money and a dreamer. And she was cynical and flawed and selfish and yet she still captured the heart of a man who adored her...flaws and all

King Arthur: I totally wanted to be King Arthur (but a Queen, and instead of Arthur I was going to be Agnes....I have no idea why I latched onto that name but I did) A castle, Camelot, Knights of the Round Table...seriously, I still want to be King (Queen) Arthur (Agnes)...to have a table full of men willing to do whatever you asked of them....hmm...never thought about that until just now....

Mark Twain: crazy hair, a steamboat pilot, wrote books and essays, had multiple pen names (one being Thomas Jefferson Snodgrass) used naughty language, was wildly funny and satirical, smoked a pipe, was born and then died with Halley's Comet.....Mark Twain was a literary bad ass before we even knew what a literary bad ass was...why would one not want to be Mark Twain?

You know, it is starting to become clear to me why the kids on the bus picked on me....