This was not something I knew about Jeff until about a month ago when he and my sister Felicia moved into their new house in Saco.... a mere 4.8 miles to Old Orchard Beach

Old Orchard Beach (OOB) is, in Jeff's words, The Bangor State Fair with water, sand and Canadians in speedos

He could not wait to take us there

The water and sand are, well, beach like
Jeff and Felicia taught Lucy how to Boogie Board
Luce had an absolute blast and laughed every time a wave knocked her over and gave a victory whoop when she caught a wave and rode it into shore

And I totally forgot OOB is indeed a vacation destination for Canadians...and they do indeed sport speedos

On top of that, as if the Fair and foreigners in speedos were not enough, the streets are lined with food booths, kitschy stores and, the ever present booth at which you can buy some of the classiest art ever created on a T-Shirt, a License plate, a hat, coffee mug, key ring.....

The booth you can't ever imagine purchasing anything from but you are so mesmerized by the process, you stand there for extended periods of time enthralled with the artistic process unfolding before your very eyes

At some point, when we decided we would make a trip to OOB, Jeff started talking about getting my sister just such a license plate.... maybe the orangey/yellow/brownish sunset beach scene with her name
Or a rainbow and unicorn and hearts with her name and Summer 2016
Or their names surrounded by hearts and the words Together Forever blazing across the airbrushed night sky

In any case, Jeff planted this seed of airbrushed wearable art in my head

And by the time we arrived at the OOB Boardwalk, I had convinced myself that Lucy's summer would not be complete unless she had a personalized airbrushed something....

We decided to wander up the street to poke our heads in a couple shops
But before we hit the kitschy stores that lined the street boosting boogie boards and beach carts for $9 and hemp pullovers (2 for $15), we stopped at the Old Orchard Beach Airbrush Booth

I brazenly told Lucy she could pick out whatever she wanted

She immediately honed in on a cat design

And though it was a tabby cat in the sample book with a yellow background, she convinced the guy she needed it to be a black cat like her Ziggy Boy with an orange background because orange is her favorite color
Oh an if they didn't mind, could they do her name in cursive...she loves how her name looks in cursive

Sure, we can do that the cranky balding guy with bad teeth told her
For $28 he said to me with a snarky scowl on his face and a tone of indifferent impatience in his voice

Then I saw Lucy's face

And Lucy's summer is complete 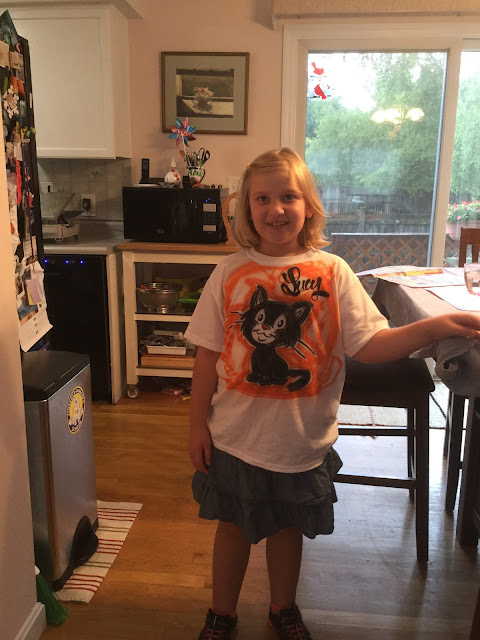