Dad (emphasis on the second D, really quit charming...sort of sounds like the way I imagine her saying Dad as an embarrassed 13 year old...DaaaaD)

Hi (accompanied by a wave or a high five, or sometimes just a head bobble...not just a single bob like when a gentleman tips his hat and says hello, but a bobble as the head keeps moving just like a bobble head doll.....which may be what everyone gets for Christmas next year, a Lucy Bobble Head)

This (she points at stuff and says “This” like a question, so we tell her what it is)

Black Bird (yeah, random I know. We got her a bird feeder for her birthday and we were watching the birds on it the other day….I said something about the black birds and she started repeating me)

A monkey noise (ok not really a word, but too cute to not mention……if you ask her what a monkey says, she makes the monkey noise)

The Count Dracula Laugh (again, not really a word but if start counting and pause in between each number, she gives you the laugh…..hilarious)

Notice Mum, Mom, Mama, Mummy or no variation thereof made the list......which is okay for now but if her next word is something like aardvark, elephant, iguana or supercalifragilisticexpialidocious instead of Mama, I'm going to be pissed 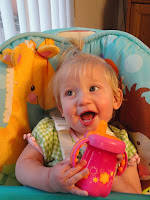